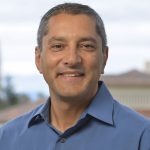 Juan Santiago received his MS and PhD in Mechanical Engineering from the University of Illinois at Urbana-Champaign in 1995.  His research includes the development of microsystems for on-chip chemical and biochemical analysis, methods for DNA quantitation and hybridization, and electric-field based deionization methods. Applications of this work include genetic analysis, pathogen detection, and the production of drinking water.  He is a Fellow of the American Physical Society, a Fellow of the American Society of Mechanical Engineering, and a Fellow of the American Institute for Medical and Biological Engineering.  He is an Editorial Advisory Board of the journal Analytical Chemistry, and an Associate Editor of the journal Microfluidics and Nanofluidics.  He is co-founder of several companies in the microfluidics area, co-inventor of micron-resolution particle image velocimetry (Micro-PIV), and director of the Stanford Microfluidics Laboratory.  He has served as Associate Editor of the journal Lab on a Chip (’08-’13).  Santiago has given more than 30 keynote and named lectures and more than 150 additional invited lectures.  His work is cited about 1500 times per year (Google Scholar h index of 68).  He has graduated 28 PhD students and advised eight postdoctoral researchers. 19 of his former advisees are now professors at major universities.  He has authored and co-authored over 190 archival publications and 200 conference papers.  He is a named inventor on 50 patents, 24 of which are currently licensed.